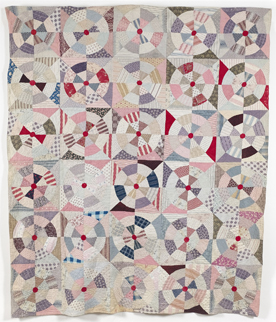 The Coby Foundation, located in New York City, the nation’s only foundation to focus solely on grants to the fashion and textile field, awarded $392,000 in 2014 to 20 organizations, the largest number of grants given out in its 15-year history.

The Wadsworth Atheneum in Hartford received $50,000, one of the two largest grants the Foundation awarded in 2014, for Gothic to Goth: Romantic Era Fashion and its Legacy. The exhibition will examine women’s and girls’ dresses from 1810-1860 alongside paintings and furniture of the period and will conclude by examining the influence of Romanticism on contemporary fashion with examples of works by such designers as Alexander McQueen and Zandra Rhodes ($50,000). Another grant for $50,000 was awarded to the Museum at the Fashion Institute of Technology for Dance and Fashion, which featured nearly 100 dance costumes and dance-inspired fashions. The Guardian called the FIT exhibition “thoughtfully curated and beautifully staged.”

The Neuberger Museum in Westchester County received the third largest grant, $40,000, for Kuba Textiles: Geometry in Form, Space, and Time, an exhibition that examines this Central African kingdom and its artistic legacy, which is uniquely rich in elaborate costume regalia and cloths made of raffia. The Foundation supported another African-themed project at the Smithsonian’s Anacostia Community Museum, in this case programs connected to Ubuhle Women: Beadwork and the Art of Independence, an exhibition of contemporary South African bead artists ($15,000). An exhibition of the work of a contemporary Mexican fashion designer, Carla Fernandez, was presented by the Isabella Stewart Gardner Museum in Boston ($25,000).

American artists of color received support through projects in three institutions. The Mattatuck Museum was awarded $10,000 for Stories and Journeys: The Art of Faith Ringgold and Aminah Robinson, presenting narratives of African American history and culture. And the Peabody-Essex Museum in Salem received funding for Native Fashion Now, which will present new dimensions in Native fashion since the 1950s ($25,000). Native American culture was also honored by a grant to the Penn Museum in Philadelphia for the installation of Native American Voices, a long-term installation of that institution’s important holdings ($25,000).

The Farnsworth Art Museum in Maine received Coby Foundation funding for an upcoming retrospective of the art of Marguerite Zorach (1887-1968) ($20,000). Fiber: Sculpture 1960–present, the first exhibition in 40 years to examine the development of abstraction and dimensionality in fiber art from the mid-twentieth century to the present, was mounted by the Institute of Contemporary Art, Boston ($30,000). Other exhibitions of contemporary fiber art included an installation at the Philadelphia Art Alliance by Caroline Lathan-Stiefel, entitled “Greenhouse Mix” ($7,000), and a survey of contemporary tapestry artists at New Jersey’s Hunterdon Museum ($10,000).  City Lore, which documents New York’s grassroots cultures, will present, at its gallery in the East Village, Hats Off: New York City Hats and Hat Makers, which aims to make New Yorkers aware of the rich millinery traditions thriving in the city and the men and women who proudly don their hats at churches, across promenades and on special occasions ($10,000). Traditional Arts in Upstate New York (TAUNY) received planning funds for Quilts and Comforters of Northern New York, which will include extensive fieldwork in that rural region ($15,000).