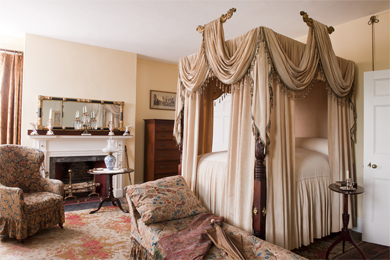 The Coby Foundation, the nation’s only foundation to focus solely on grants to the fashion and textile field, awarded $354,000 in 2010 to 15 organizations, all located in the Northeast and Mid-Atlantic. Grants ranged from $8,000 to $70,000. Of particular note in 2010 were exhibitions exploring historical themes from the 15th through the 20th centuries.

Fifteenth- and sixteenth-century costume will be the focus of an unusual exhibition at the Morgan Library and Museum in New York City in 2011. Illuminating Fashion: Dress in the Art of Medieval France and the Netherlands will explore the evolution of clothing in Northern Europe, from the fashion revolution of the early 14th century to the dawn of the Renaissance in 1515. In addition to the miniature paintings from the Morgan’s collection, the organizers plan to display exact replicas of four garments illustrated in the miniatures ($35,000).

Two exhibitions, one at the Connecticut Historical Society in Hartford and the other at the Museum of Fine Arts, Boston, explore textile traditions using extremely rare materials, many dating back to the 17th and 18th centuries. The Hartford exhibition, titled Connecticut Needlework: Women, Art, and Family, 1740-1840, and which received the third and final year of a grant totaling $90,000, highlights clothing, bedding, and accessories, school work by children as young as 6 years old, and masterpieces of needlework art. Embroideries of Colonial Boston: Samplers, a feature of the MFA’s new American Wing, demonstrates the role these schoolgirl exercises played in educating Boston’s genteel young women ($20,000).

Two grants support projects for the 2011 commemoration of the 150th anniversary of the start of the Civil War. The year’s largest Coby grant ($70,000) went to the American Textile History Museum in Lowell (MA) for an exhibition, scheduled for 2012, that will use quilts, clothing and other materials to tell about the events that led to the Civil War, the stories of men and women affected by it, and the opportunities and challenges that followed. The New York State Battle Flag Preservation Project, administered by the Natural Heritage Trust, received $30,000 for the first of a series of exhibitions drawn from the State’s extraordinary collection of 850 Civil War flags, the largest such collection in the nation. The exhibition will take place outside the Governor’s Office in the Capitol in Albany beginning in 2011.

The history of 20th-century fashion is being supported by Coby Foundation grants. The Museum of Art of the Rhode Island School of Design (RISD) received $40,000 to plan Cocktail Culture, Ritual and Invention in American Fashion, 1920-1980, scheduled for 2011. The genius of French artist Sonia Delaunay will be highlighted by the Cooper-Hewitt National Design Museum in an exhibition for 2011 entitled Color Moves: Art & Fashion by Sonia Delaunay, which will focus on Delaunay’s fashion and textile designs from the 1920s and 1930s ($40,000).

Vermont’s Shelburne Museum received $30,000 in 2010 for In Fashion, an exhibition of about 200 items ranging from 19th century Parisian gowns to poodle skirts, which will debut in 2011.

Fashion and textiles specific to the Ukrainian wedding tradition are being displayed in a major exhibition at the Ukrainian Museum in New York City ($75,000). The exhibition compares customs that were typical in Ukraine into the early 20th century to more recent wedding practices in Ukraine, the United States and Canada.

Coby funds allowed for the installation by artist Orly Genger of “Big Boss,” which she created with 100 miles of knotted rope as part of the exhibition Material World: Sculpture to Environment at Mass MoCA in North Adams (MA) ($15,000).  Other grants in 2010 went to the Museum of the City of New York for a second year of support for its efforts to create a Web site comparing gowns by Worth and Mainbocher ($25,000); to the Samuel Dorsky Museum of Art at SUNY New Paltz for an exhibition of 19th century woven coverlets organized in collaboration with Historic Huguenot Street ($8,000); and to the Fenimore Art Museum in Cooperstown, NY for Connecting Threads: A Century of Upstate Fashion ($11,000).