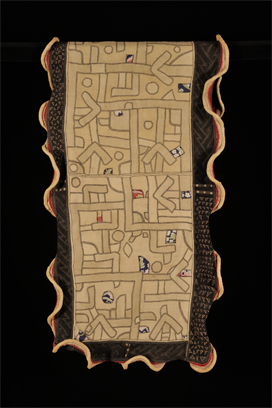 The Coby Foundation, the nation’s only foundation to focus solely on grants to the fashion and textile field, awarded $355,000 in 2013 to 14 organizations, all located in the Northeast and Mid-Atlantic. This year’s awards were notable for the number and quality of fashion-related projects. They ranged from Future Beauty: Avant-Garde Japanese Fashion at the Peabody-Essex Museum, featuring works by such designers as Rei Kawakubo and Yohji Yamamoto ($25,000), to the slinky silhouettes of Stephen Burrows in a retrospective at the Museum of the City of New York ($50,000), to planning for a contemporary exhibition entitled Buckskin to Bikinis at the Iroquois Indian Museum in Howe’s Cave, New York ($9,800).

Other Coby-funded fashion exhibitions included a second, implementation, grant for Artist/Rebel/Dandy: Men of Fashion, which featured myriad manifestations of the dandy’s style and persona, at the Museum of the Rhode Island School of Design ($30,000). In suburban Philadelphia, the Foundation supported the Chester County Historical Society and its exhibition, Profiles: Chester County Clothing of the 1800s, which, among other things, contrasted Quaker plain dress and fashionable wear of the era ($35,000).

Other notable projects that received Coby Foundation grants included Historic Philadelphia’s Betsy Ross House for its program, “Dressing the Bed,” a living history presentation that features Betsy Ross, in her upholstery shop, stitching bed curtains using 18th century hand-sewing techniques. When finished, the bed curtains will be installed in Betsy’s bedroom for ongoing display ($16,700). The Biggs Museum of American Art in Delaware was supported for an exhibition on Delaware samplers, Wrought with Careful Hand’: Ties of Kinship on Delaware Samplers ($25,000). The National Museum of Women in the Arts received Coby funds for the Washington, D.C. presentation of Workt by Hand: Hidden Labor and Historical Quilts and associated programs ($10,000).

Two organizations received continuing support for major projects. One was the Metropolitan Museum of Art for The Interwoven Globe: Worldwide Textile Trade 1500-1800 and Woodlawn Museum and Gardens in Ellsworth, Maine for its ambitious project to preserve and exhibit one of the oldest and most significant upholstered beds in the United States. And finally, the Foundation underwrote the third in a series of exhibitions of battle flags used in the Civil War in commemoration of the War’s 150th anniversary. The exhibition, entitled 1863: Loyal till Death, was a collaboration of NYS Parks and NYS Military Museum staffers.